Global communities would like to believe that we live in an ultra-civilised and avant-garde world of the 21st century, modern and progressive in every possible way. But violence against children, especially Child Sexual Abuse (CSA), is a persistent human tragedy that is still too rampant in these same communities. As for India, CSA is one of the country’s most grave and disconcerting challenges. Despite several efforts including legislations and legal provisions formulated and implemented to control this abhorrent crime, CSA remains widespread across the country. It has to be acknowledged that human knowledge and perceptions are as critical and significant as legal provisions in curbing or eliminating CSA. In fact, these perceptions often become so entrenched in communities as human behaviour that they can seriously hinder progress towards reducing and eliminating CSA. This report shares evidence from a research study - Awareness and Perceptions about Child Sexual Abuse among Young Adults in India by the Kailash Satyarthi Children’s Foundation (KSCF). This study was conceptualised in order to initiate an exploration of the awareness and perceptions of young adults in India as regards CSA. The evidence from this study can be effectively used in multiple ways to tackle CSA. 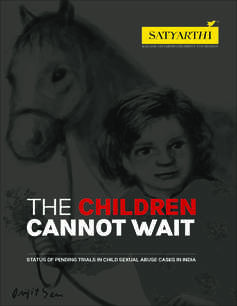